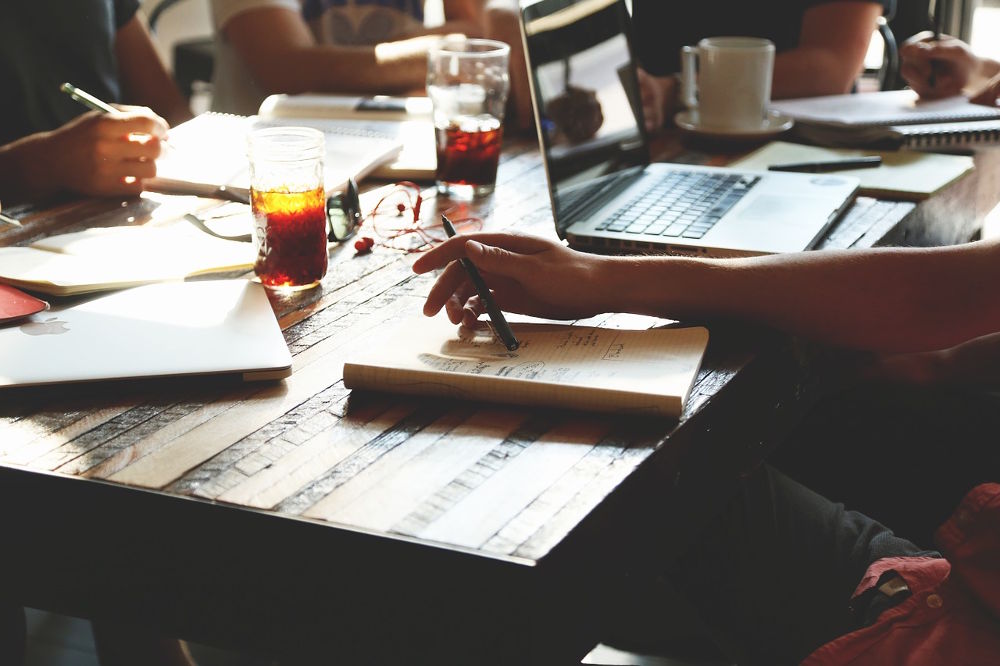 Somebody once said to me that life is a choir, a symphony. Imagine an ensemble that was competing against itself; each individual was trying to outdo the other, trying to make their voices heard over the rest. It would no longer be singing, it would be screaming!

And yet this is the way many people go about their lives. They climb to the top by stepping on the bodies of others; they withhold help and information from others; they undermine the efforts of those they see as competition.

Many eastern philosophies state that we are part of one inseparable whole. If that is so, then by sabotaging others, we are sabotaging ourselves.

Perhaps it is time to try the opposite, to join our voices with others and work together in the spirit of cooperation.

Life is a choir

We come across someone who is in the same field as we are; how do we see them? There is often a knee-jerk reaction – a competitor! Right away we begin analysing them. How much have they made? What are they doing? How old are they?

Comparison is just a waste of mental energies; it simply throws our attention and resources on something that is of no use. But there is a further danger, for it can often degenerate into unfriendly competition. Singing louder or better is not always wrong; the trouble begins when we try to stifle their voice.

There isn’t enough to go around, we mistakenly believe. There is a limited supply, so whatever they get is taking away from what is available to us. And yet we don’t realise it is this very belief that keeps us stuck, sinking.

I was recently reading that infants as young as six months old display jealous behaviours and emotions. It might be a survival mechanism, one that has a use in other areas of our lives – but perhaps in our pursuit of excellence, it is time to put this emotion aside.

Try a little change in your mindset: the next time you look at someone who has made it, simply celebrate their success. Why get jealous? Their accomplishments simply mean you can get there too. What good does jealousy do, besides clutter up your mind and lower the quality of your work?

Explore your jealousy; look deep into your mind. You might find that jealousy is simply crediting their success to something – hard work, grit, or luck – something you think you don’t have. Perhaps you might simply find it is just an excuse for any perceived failures.

Celebrate their success, learn, and watch. Let them be your inspiration, your motivation.

The spirit of cooperation

The world is a process, alive and bubbling. It is not made up of dead, unmoving objects. A stream has to keep flowing, or there will be no room for more. When a stream is blocked, when there is no outflow, all there remains is stagnation, a stench.

And so it is a truth: what flows out decides what flows in. The opposite of competition is cooperation. When we come across someone in the same field, there is no reason to block their path. Instead, block off our natural tendencies for jealousy, and try, just once, giving them a hand. Speed up their journey, and see if it doesn’t make a positive difference in your own.

Explain it however you want. Social psychologists speak of reciprocity. But it is simply common sense. Many people feel indebted to those who have given them something – big, small, it doesn’t matter. Some smart restaurants have begun writing a personalised “thank you” on the bill. Others bring the bill with a small piece of candy. The customers, in return, tend to be far more generous in their tipping.

Other people might believe this is a reflection on the law of Karma. Give and you shall receive. Yet others might feel your actions will change your mindset from one of lack to one of abundance.

This is a strange quote, for nowadays words like justice and truth have almost a wishful feel. Even those who live their lives to such ideals see them as somehow separate from the pursuit of their goals. How can compassion and success co-exist, they ask, in such a cutthroat world?

Think and Grow Rich is a book entirely focused on the making of money. It contains many invaluable lessons; character traits to be built – Persistence, faith, and self-confidence.

And yet it contains two lessons I’ve never heard anyone discuss.

I fully realize that no wealth or position can long endure, unless built upon truth and justice, therefore, I will engage in no transaction which does not benefit all whom it affects.

I will induce others to serve me, because of my willingness to serve others. I will eliminate hatred, envy, jealousy, selfishness, and cynicism, by developing love for all humanity, because I know that a negative attitude toward others can never bring me success.

I will engage in no transaction which does not benefit all whom it affects. Just one lesson, and yet it contains so much truth. Already, the statement is warning against fraud and dishonesty.

But it goes deeper than that. In every transaction, you must give them a greater use value than they’ve given you in cash value.

I have a friend who works in counselling. One night we were having a group dinner, and someone at the table began deriding her occupation.

“Why do you charge hundreds of dollars?” he asked. “You’re not doing a thing; all you do is just sit there and listen! Your clients will be better off simply going out for a coffee with a friend; all they want is someone to listen to them!”

She admitted to me later that she was stunned and hurt by his accusation. I asked her if he was right, if she was charging too much. She shook her head firmly.

“I know I am providing value. If all I was doing was listening like a friend would, then I would lower my fees. If I wasn’t helping at all, I would quit my job. But I’ve seen depressed people brighten up, communicate with their loved ones, work better at their jobs. I’ve given people back their ability to sleep at night. Their entire lives have changed. The prices I charge are more than fair for such a service.”

She was right, of course. If she wasn’t making a difference, she would be violating this principle, for she was the only one benefiting.

The truth in the rest of Hill’s teachings is also evident. A quick look at the greatest leaders in history will find they inspire loyalty because they truly care for those under them. Why, then, do so many people still do otherwise?

An eye for an eye

On the external level, this much is obvious. We’ve spoken of reciprocity, and naturally that applies to lies, abuse and manipulation. People are not stupid. You might lie to them and succeed for a while, but how long can your deception continue? And when your deception ends, your lies are exposed, what next?

An eye for an eye might leave us all blind, but it is still a philosophy many live by.

Your thinking affects your life

A competitive, jealous mindset hurts you as much as it hurts the other person – this is true often on an internal level as well.

Cognitive Behavioural Therapy is a popular force in psychology now, and it has a strong emphasis on changing thoughts. How you think, how you look at your life, determines what you will get out of it.

Huckleberry and Dillon both want the same job badly; they are sitting at home one afternoon, nervously awaiting the results of the interview.

Then the phone rings – bad news! Both of them failed, the job had gone to Anita.

Huckleberry sits down and despairs. His mindset is based on struggle and competition, and his thoughts are running rampant. “It is a hard world,” he thinks. “I’ll never get what I want. I hate her! What does Anita have that I don’t?” He is dejected and disheartened, and these thoughts keep him there.

Perhaps he goes one level further, seeking to discredit her in front of the employers. What then? Lies, backstabbing, mind games? Maybe it works, and he steals her job from her. What then? A guilty conscience, perhaps. Or he might find himself constantly looking over his shoulder. Anita might seek revenge one day, or another co-worker might pull the same trick on him.

Dillon believes in cooperation, in justice, in giving. He might be dejected for a while, but he picks himself up soon enough. “I’ll have to buy Anita lunch and get a few interview tips from her,” he thinks. “Maybe with her help and a bit more practice, I’ll land my next job.”

And so we return to the state of inner acceptance.

Throughout the entire series, we’ve discussed the importance of inner acceptance in any pursuit. Resistance, frustration, and fear are often the cause of all the negativity we’ve discussed.

But once we bring an inner yes to our journey, all of that will begin to dissolve… and we begin to find what we want.

Are you scared of Success?
Understanding the Origin of Human Suffering
To Top